Barney, a friend from Orroroo via Oxford and now residing in Boulder WA, has recently returned from a Veteran rally in Tasmania.

He and Jane took their 1914 Talbot, complete with its re-made radiator (which cost as much as a 2/h diesel 508, now there’s an equivalence!) across on the ferry.

They took a couple of photos too! 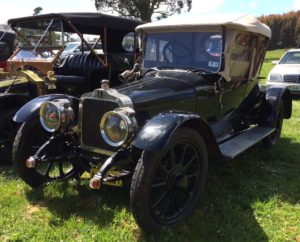 If you were wondering, the canister seen on the running board in the second photo is an acetylene generator for the lights.

A boiling problem with the car was a concern however it was resolved with a 15 degree spark adjustment on the magneto.  If you’re not sure what a Magneto is, you can read about it by clicking here!